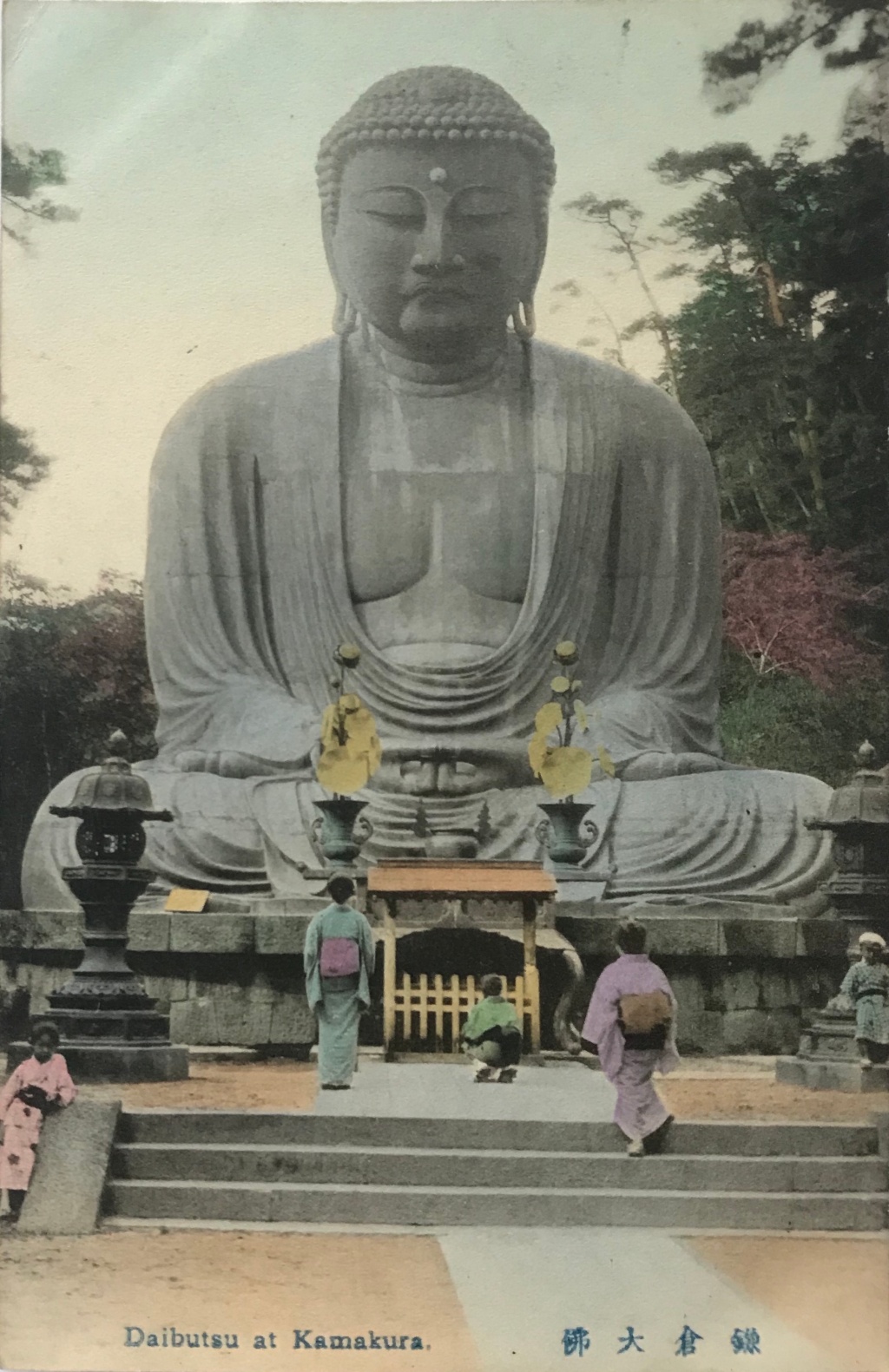 After the Meiji Restoration, the popularity of photography began to overshadow traditional Japanese woodblock printing. Increasingly, woodblock artisans came to find employment with photography studios, adapting their technical painting skills to add vivid color to monochromatic photographs. In the beginning of the twentieth century, due to the craze surrounding Japanese picture postcards (ehagaki 絵はがき), artisans continued to ply their trade by adding translucent water-soluble pigments to these small format calotypes. One of the most famous postcard distributers was Tonboya トンボヤ, or the “Dragonfly Studio,” first opened by Yoshimura Kiyoshi 吉村清 around 1905.[1] The Tonboya storefronts in Yokohama, first located in the Isezakichō 伊勢佐木町 district before moving to the more heavily trafficked Motomachi 元町 district, were easily identifiable because of large signboards made to look like red cylindrical postal boxes (yūbin posuto 郵便ポスト) widely adopted in Japan. One side of the signboard had the word “POSTALCARDS” painted on it, while the other said ehakaki エハカキ [sic](“picture postcards”), suggesting Yoshimura catered to both foreign and domestic travelers.[2] One image that would represent the photographic interests of both groups would be the Kamakura Daibutsu, located close to the port of Yokohama [Figure 1].

By setting the camera on the second landing of the paved walkway, this unknown photographer filled the frame with the image of the Daibutsu; positioning the statue frontally and symmetrically, this framing is similar to many of the images produced by Yokohama photography studios. The image depicts three figures, two women and a young child, facing the Buddhist icon in the center of the photograph. This setting might elicit other images of religious piety at this site, but the mise-en-scène is complicated by the presence of two more children, standing at each of the sides, who stare directly at the viewer. Their presence might have been obscured had it not been for the colorist who painted them in light hues of blue and pink. Notably, their casual posturing is stark contrast to staged “photo ops” of foreign travelers who try to visually suggest their domination of the Orient. Because of these elements, on the whole, we are made to feel as if the scene is staged and that we have been caught in an act of  voyeurism. The women and child, positioned center-stage, engage in a orchestrated religious performance while the children at the edges observe us watching them. A rather apt visual metaphor for the Orientalist gaze, where the artist attempts to create a certain controlled vision of the East, but with “unruly” actors foiling the illusion.[3]

This postcard is not imprinted with a trademark to identify the publisher. The black ink and serif font used for the reverse, however, in addition to the guide lines provided for writing the address, all suggest this card was made by Tonboya.[4] In addition, the position of the diving line for correspondence indicates this card was printed between 1907 and 1918. If the image on the obverse was not self-evident enough, bilingual cerulean letterpress (note the impression the reverse) identifies the scene clearly: “Daibutsu at Kamakura.”

[1] Several online English sources claim Tokutaro Maeda was the founder of Tonboya, but I have found no Japanese sources that confirm this. I prefer here to follow the print Japanese sources (e.g. Saitō 1985: 1), but leave the question unsettled. 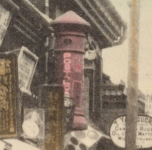 The full postcard can be found here (not part of the Archive).

[3] By shooting one woman mid-stride ascending the small flight of steps, this photographer is (accidentally?) paying homage to Enami Nobukuni 江南信國 (1859—1929), but without the overal effects of sterling visual narrative.

[4] The best site for identifying Tonboya cards remains here: http://tamayochankankousya.seesaa.net/article/421306802.html. Another common reverse printing of Tonboya during this period is discussed here. 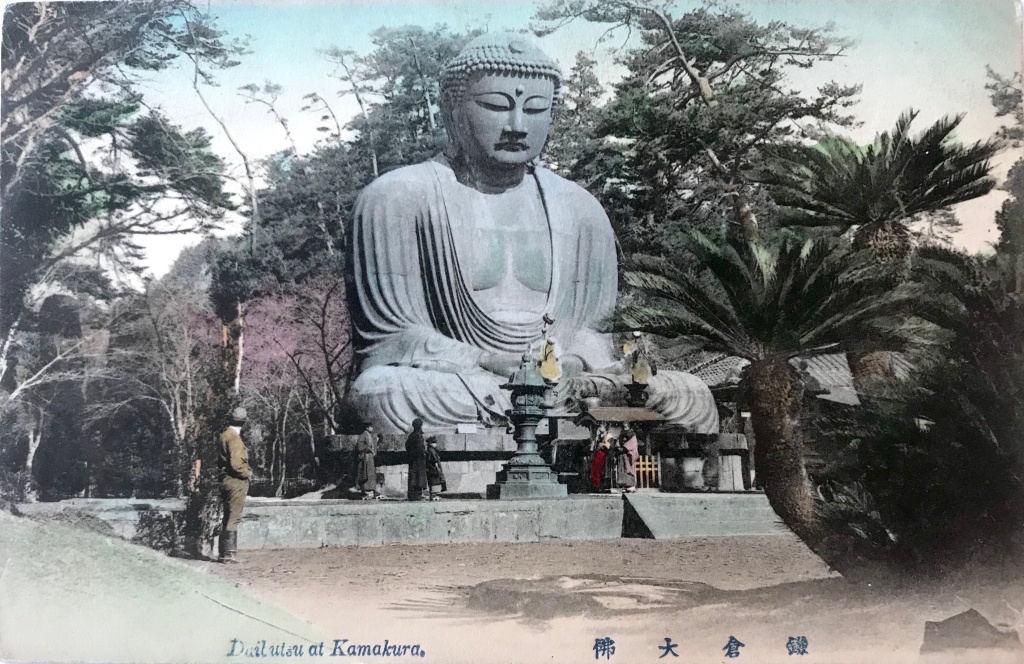 By the end of the nineteenth century the port city of Yokohama had developed into a thriving tourist destination. Consequently, numerous Japanese shops opened to cater to the needs of both domestic and foreign travelers. Perhaps surprising to a modern reader, among the prized goods offered for sale were picture postcards (ehagaki 絵はがき), the first truly commodified form of the photograph which unexpectedly became a collectors craze in the first decade of the twentieth century.[1] Around 1905, Yoshimura Kiyoshi 吉村清, the proprietor of the well-known Tokyō-based publisher Kamigataya 上方屋, started a new venture in Yokohama, called Tonboya トンボヤ, or the “Dragonfly Studio.”[2] The dragonfly was long seen as symbol of courage and strength in Japanese culture, and thus it was cherished by the samurai and bestowed the romantic name of the “Victorious Insect” (kachimushi 勝ち虫). This lore notwithstanding, Tonboya postcards – emblazoned with its distinctive dragonfly trademark – soon became some of the most famous and widely circulated postcards of the period.

This image of the Kamakura Daibutsu [Figure 1] highlights the rustic setting of the colossal statue, framing the statue between sprawling tree branches and the silhouette of a sago palm. With the camera placed in the southwest corner, our unknown photographer creates a voyeuristic scene as a man in knee-high mud boots and western attire peers towards group of Japanese visitors from behind a tree. Seeing this observer from behind, we take his perspective and also gaze upon the group of Japanese visitors dwarfed by the overlooking bronze statue. The brightly colored garments of the women on the right stand in contrast to the uncolored gray shades of the men and boy on the left [Figure 2]. The boy wears a school uniform (gakuran 学ラン), a style adopted decades earlier based on French and Prussian military outfits.[3] Among this group, only a single man looks up towards the Buddhist statue. The others stand and stare at each other from several paces apart. The gives an unnatural effect to the scene, as the stationary bodies and odd spacing fails to build up a clear visual narrative. What is the relationship of these temple visitors to each other? What is their purpose for being there? As was typical of cards from this period, bilingual cerulean letterpress informs us as to the identity of the Buddhist figure, the “Daibutsu at Kamakura” (note the imression left on the reverse along the bottom edge). 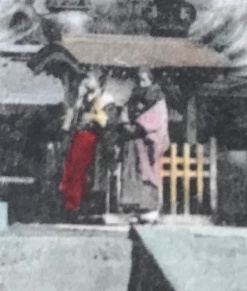 Often, Tonboya would impress its dragonfly logo at the lower right on the front of the card, but our variant lacks this identifying element.[4] Turning to the reverse of our card [Figure 1], we still fail to easily locate the characteristic mark of the dragonfly. So, just how can this card be distinguished? The designers at Tonboya devised a creative and playful way to identify their publishing studio; they replaced the ki (キ) in hagaki (ハガキ, “postcard”) with a highly stylized dragonfly illustration [Figure 3]. Only the most attentive observer would notice this subtle alteration, but once noticed it becomes an easily identifiable marker of this studio. This creative design can be dated back to around 1909 and remained throughout Tonboya’s existence into the late 1920’s.

[2] Several online English sources claim Tokutaro Maeda was the founder of Tonboya, but I have found no Japanese sources that confirm this. I prefer here to follow the print Japanese sources (e.g. Saitō 1985: 1), but leave the question unsettled. Another unresolved question remains the relaitonship between Kamigataya and Tonboya. It appears that Tonboya may have been a distribution name of postcards printed by Kamigataya (which continued to also publish postcards under its own name). Some sources claim Tomboya opened as early as 1904, other as late as 1907.

[3] The development of Japanese school uniforms are detailed here: http://journal.media-culture.org.au/index.php/mcjournal/article/view/1041.

[4] Tonboya would also often include an identifying letter and stock number in the lower left, but this is also missing in our specimen. It is also possible to find cards with the letter and numbering system, but still lack the dragonfly icon, see here: https://www.maryevans.com [then search for the reference number 10989247]