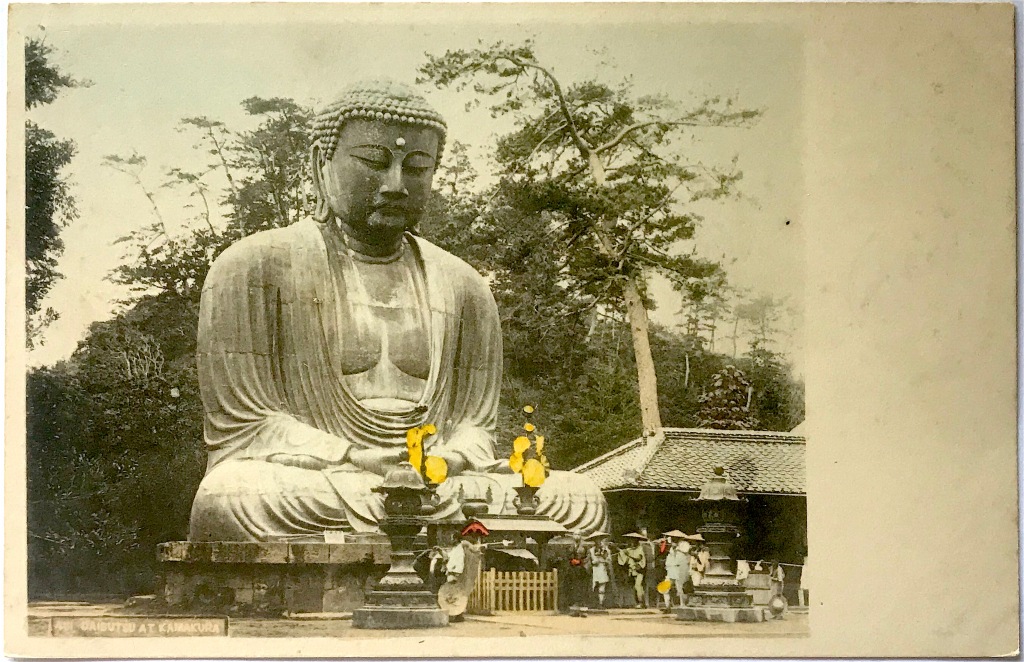 For nearly three decades after the first Japanese postal cards were issued in 1873, printing and distribution were strictly controlled by the government. Only with changes in postal codes in 1900 could private publishers start printing and selling their own postcards. Importantly, and for the first time, these privately issued cards could bear images on the obverse, thus being termed “picture postcards” (ehagaki 絵葉書). Previous government-issued specimens were printed blank to accommodate a sender’s written message. Moreover, the growing use among Japanese print shops of inexpensive collotype printing equipment meant photographs could be easily reproduced for this new medium. Many early photographic postcards are reproductions of images originally created and sold in Japanese photography studios, as is the case with the examples here.

This postcard depicts the Kamakura Daibutsu, scaled to fit in the upper-left corner of the card [Fig. 1]. The blank space on the right side was reserved for a written message; Japanese postal code required the reverse side to be reserved solely for the name and address of the recipient. Once messages could be included on the reverse in 1907, postcard images were regularly scaled to fit the entirety of the obverse side.

For artistic flourish, the publisher of our card employed a subtle trompe-l’œil, making it appear as if the corner of the photographic image is curling off the paper. Visual illusions such as this would make the postcard stand out among a sea of similar imagery. Printed in large block lettering, the caption clearly denotes the subject of the photograph, the “Daibutsu at Kamakura.” 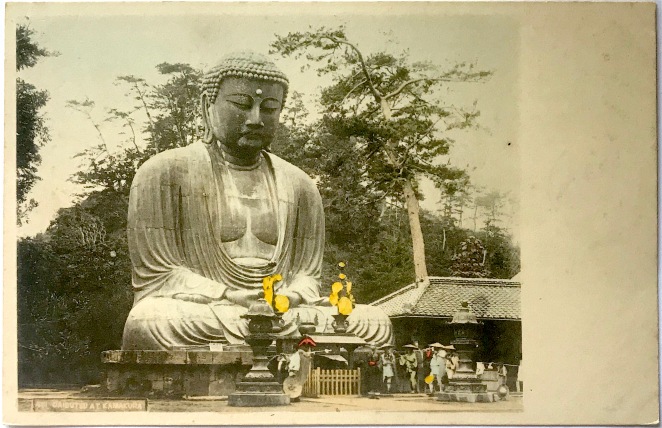 Another postcard employs the same photograph. Here, the image covers a larger portion of the card, but lacks the trompe-l’œil effect [Fig. 2]. Additionally, the caption is much smaller and incorporates an identifying stock number, 451 (or possibly 461). It is of note that a caption which incorporates a stock number with a title is characteristic of prints made by Japanese photography studios of the 1880’s and 1890’s. By comparing this stock number to known lists gleaned from published Japanese studio albums, it appears likely the original photograph was taken by Esaki Reiji 江崎礼二 (1845-1910), a famed Tokyo-based photographer.[1]

Esaki apprenticed under the pioneering photographer Shimooka Renjō 下岡蓮杖 (1823-1914) in 1870 before opening his own studio in 1871 in Asakusa Park.[2] He soon established himself as a technical master, among the first of Japanese photographers to adopt the new gelatin dry-plate (zerachin kanpan ゼラチン乾板) technique in 1883 and executing technically difficult pictures of a naval mine detonating in the Sumida River (1883) and night-time exposures of a lunar eclipse (1884) and exploding fireworks (1885). The shorter exposure times of the dry-plate process also allowed Esaki to more easily photograph fidgeting children, an expertise he proudly displayed in a famous collage of more than 1700 young children and infants (1893).[3]

The photograph of the Daibutsu by Esaki (or one of his studio assistants) depicts the bronze statue from the southwest corner, an uncommon, but not unprecedented angle. More relevant to the site’s religious heritage, the photograph shows a line of Japanese pilgrims (jinreisha 巡礼者) in front of the Daibutsu, easily identified by their broad circular sedge hats and walking staffs carried over their shoulders [Fig. 3]. The mise-en-scène is more relaxed than reverent. The lead pilgrim, who holds his hat in his hand, appears to read the small rectangular sign perched on the pedestal (which, coincidentally, forbids climbing on the statue), while his fellow travelers casually stand conversing with one another. Only the temple priest by the offering table glances directly towards the camera.[4] This mundane expression of religious piety stands in contrast to the highly orchestrated images of devotion sometimes staged by Western photographers. Significantly, the distinction between Japanese pilgrim and tourist is often blurred, as both can engage in similar activities at a pilgrimage site, including visits to the temple souvenir shop.

Although faded, the hand-tinting is still visible in both cards, with the slate blue colossus overlooking his faithful visitors. The elements in the scene suggest this photograph was taken in the late 1890’s.[5] 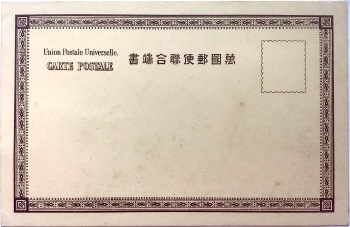 The reverse of both cards is bordered by an ornamental filigree-like design in burgundy ink [Fig. 4]. These are examples of “undivided back” cards, since no line yet separates the areas on the back where the correspondence and address would later come to be written. This functions now as an easy identifier for dating old postcards, with these dating between 1900 and 1907. Since it was not yet common for publishers to imprint their names or trademarks on the back, it is difficult to tell who printed these beautifully rendered cards.

*This is part of a series of posts devoted to exploring the development of a visual literacy for Buddhist imagery in America. All items (except otherwise noted) are part of my personal collection of Buddhist-themed ephemera. I have also published my working notes on identifying publishers of Meiji and early Taishō postcards and establishing a sequential chronology for Kamakura Daibutsu photographs.

[1] Stock lists for Esaki’s studio do not include numbers 451 or 461, but numbers 452 to 460 are all images of Kamakura, specifically Hachiman Temple, the Daibutsu, and the lotus ponds in Kōtokuin (the temple that houses the Daibutsu). See Bennett 2006a: 129. Unfortunately, almost all attributions to Esaki and his studio remain tentative and more work desperately needs to be done on his photographic oeuvre.

[2] For Esaki’s biographical information, see Bennett 2006b: 165 and here and here. Several Japanese resources note his name as “Ezaki,” but I follow the standard English “Esaki,” which is also how he promoted his studio on photographic mounts and in other published materials (the older “Yesaki” can also be found).

[3] This image was also sold in the United States through Sears & Roebuck catalogues.

[4] Closer inspection reveals a young boy towards the far right of the photograph, holding his hat in his hand, also possibly peering towards the camera

[5] I have seen postcards of this image cancelled in January 1902, setting a firm terminus ante quem for the photograph. I have also seen a third postcard, oriented vertically, bearing this same photograph.