In the summer of 1887, Nagayo Sensai 長与専斎 (1838-1902), a physician and Director of the recently incorporated Bureau of Health 衛生局, founded Japan’s first sanatorium, the Kaihin-in 海濱院, on the beaches of Kamakura. Many Japanese physicians during the early Meiji (1868-1912) were trained under German doctors hired to live and work in Japan and a popular contemporary belief in Western medicine was that regular exposure to seawater would ameliorate people stricken with tuberculosis. German doctor Erwin Bälz (1849-1913) first recommended the mild climate of Kamakura as an optimal location for sea bathing therapy, a belief also championed by Nagayo. This motivated Nagayo, working with wealthy Yokohama silk merchants, to construct a vast Western-style resort on Yuigahama Beach 由比ヶ浜海岸 in Kamakura, replete with several acres of pine groves and spacious lawns. Called Kaihin-in (“Seaside Facility”), patients would participate in regular sea bathing sessions and enjoy the open-aired, scenic vistas. Within a year, however, mismanagement would cause the facility to be repurposed into a hotel and resort that catered to foreign visitors.[1]

The hotel was renamed the Kamakura Kaihin Hotel 鎌倉海濱ホテル and quickly became a tourist destination in its own right. In 1891, an American sailor, M. B. Cook, described his pleasurable visit as such: “From the streets of Kamakura we drove to the Kaihinin, a large hotel or marine sanitarium facing the sea, and surrounded by beautiful walks and drives. In the summer season it is full of guests, and being in one of the most healthy places in Japan, and the visitors are given so much attention, that it is becoming a center of attraction to all American tourists.[2]

The hotel was also featured in Murray’s A Handbook for Travellers in Japan, the premier English language guidebook for foreign tourists in Japan. It remained a wildly popular destination into the twentieth century, located a mile from the main Kamakura train station (the Yokosuka Line 横須賀線 opened in 1889) and was famed for its European-style cuisine, affordable rates, and English language guest services. It was also located less than a mile directly south from the most important foreign tourist attraction in the region, the Kamakura Daibutsu.

The image on the postcard obverse [Fig. 1] shows the lawns and landscaping of the hotel grounds that led out towards the ocean (seen on the far left). The sprawling multi-storied complex is topped by a flag emblazoned with “KKH,” for the Kamakura Kaihin Hotel. The sweeping, panoramic photograph provides a potent combination of modern (Western) luxury and natural beauty, sure to lure even the most cagey tourist. The text under the photograph proclaims that the site offers “the best bathing beach in Japan,” a callback to its origins as a bathing sanatorium. Importantly, the photograph is overlaid with an oval image of the Kamakura Daibutsu, with the caption proclaiming that the hotel is the “home of Daibutsu.”[3] These elements show that the postcard was also used as an  advertisement, tying together the exotic Buddhist icon of the “Orient” with the scenic luxury of the resort grounds. Roaming, half-day long horseback rides to and from the port of Yokohama were no longer necessary to enjoy the Kamakura colossus. Daytime visitors could enjoy a short trek to the temple, expose or purchase a few photographs, and return to picnic by the beach.

This photograph of the Daibutsu [Fig. 2] likely dates from after 1903 (due to the outward facing metal lotus flowers atop the offering table). The reverse of the card shows that it is an “undivided back,” definitively dating it previous to 1907 (a “dividing line” was introduced the following year). This also proves the design on the front of the card was purposeful, with the bottom blank half of the card reserved for correspondence; only the address and name of the recipient was allowed on the back. The photographer(s) and publisher remain unknown.

The same photograph of the hotel compound was later used on paper luggage tags [Fig. 3] for the Kamakura resort. Affixed to suitcases and steamer trunks, luggage tags were very popular in the interwar period. In addition to helping sort luggage in transit, these tags signaled the cosmopolitan sophistication of the tourist and thus were often designed with bold images and bright colors. The oval inset of the Daibutsu closely mirrors the postcard design, yet this photograph of the Kamakura colossus is of a much later vintage, quite possibly dating from the 1930’s [Fig. 4]. 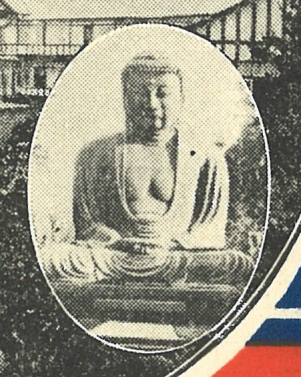 The Kamakura Kaihin Hotel suffered significant damage during the 1923 Great Kantō earthquake, but was rebuilt to its previous grandeur. The hotel would remain in operation up through World War II, until a series of fires resulted in its closing in the mid-1940s.

[1] An overview of the cultural encounters between Germany and Japan in the field of medicine are discussed in Kim 2014. For more information on Nagayo, see Rogaski 2004, esp. pp. 136ff. The best available information on Nagayo’s role in the founding of the Kaihin-in appears to have been discussed in the Exhibition Reminiscing the Kamakura Kaihin Hotel 鎌倉海浜ホテル追憶展, organized by Hirata Emi 平田恵美 of the Kamakura Central Library, Modern Historical Materials Division 鎌倉市中央図書館近代史資料室 in 2011. I am indebted to the review of this event by Noriyuki Takagi 高木規矩郎 found here, here, and here. Other scattered information can be found here. Certainly, far more archival research needs to be done for a full account of this story. I have not been able to consult this work: Kamakura kaihin hoteru: Nipponhatsu no kaihin rizōtohoteru 鎌倉海濱ホテル 日本初の海浜リゾートホテル [The Kamakura Kaihin Hotel: Japan’s First Seaside Resort Hotel], by Shimamoto Chiya 島本千也 and Hirata Emi 平田恵美.

[2] Cook 1891: 29. A handful of other late nineteenth and early twentieth-century tourist remarks can be found here.

[3] There are versions of this postcard without the small overlay of the Daibutsu. The caption instead reads “The only resort in the Far East.” The best online collection of Kamakura Kaihin Hotel memorabilia remains here.