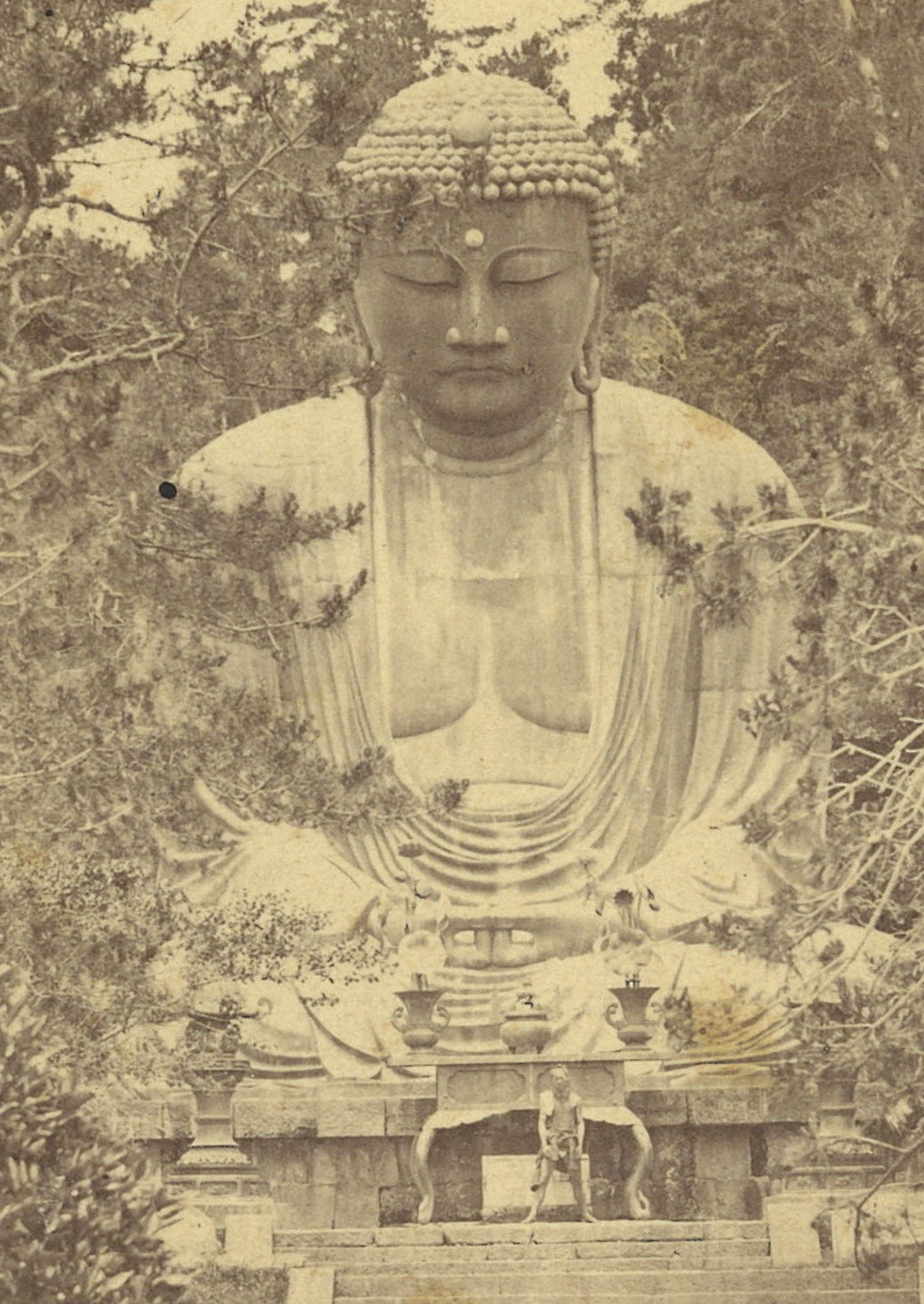 Renjō’s Daibutsu: A Pioneer of the Path

Often called the “founding father of Japanese photography,” Shimooka Renjō 下岡蓮杖 (1823-1914) was a true artistic pioneer. One of the first Japanese to practice commercial photography, Renjō (a self-styled nickname) was also likely the first oil painter and lithographer in Japan.[1] His personal reminiscence, recorded in 1891, claims his fascination with photography began when he saw his first daguerreotype in 1844 in Edo (now Tokyō). He then spent the next ten years trying to find a photographer who could teach him the craft. According to his own account, which is held in suspicion by modern scholars, in 1856 Renjō had a secret meeting with Henry Huesken (1832-1861), the translator to the American general consul at Shimoda, to learn the basic principles of photography. Regardless of the veracity of this story, Renjō opened the first Japanese commercial photography studio in the port city of Yokohama in 1862.[2] His business soon prospered and he apprenticed several of the next generation of famed Japanese photographers, including Usui Shūzaburō 臼井秀三郎, Suzuki Shin’ichi (I) 鈴木真一, and Suzuki Shinichi (II) 鈴木真一. A considerable majority of Renjō’s surviving photographic oeuvre consists of small format cartes de visite, several of which depict the bronze Daibutsu located in Kamakura, not far from his studio in Yokohama.

According to several Western travelers and tour guides from the 1860’s, the original pathway leading to the Daibutsu was a long, stone-paved walkway, tightly flanked by tall evergreen trees and ornately pruned shrubs. For some, the most picturesque view of the Daibutsu was looking down through this long pathway of greenery towards the statue at the end. By the early 1870’s, however, the temple landscaping had undergone significant renovations and the pleasant framing effect of the towering trees was lost. Algernon Bertram Mitford (1837-1916), secretary to the British Legation, described his two contrasting visits to the Kamakura Daibutsu:

“The first time I saw [the Daibutsu], in the autumn of 1866, the approach to it lay along an avenue of grand old evergreen trees, and the effect of the colossus, when seen from the beginning of the avenue, was most striking. Now, unhappily, the trees have been cut down by the avarice of the priests, who grudged the little bit of soil which might bear a few more vegetables, and who took advantage of the revolution to pretend that the trees had been destroyed by the soldiery. The beautiful coup d’oeil is lost, but the figure must always rank among the most wonderful monuments of the world.”[3]

Regardless of the reason behind the removal of the trees, the change in environment certainly altered the viewing experience of the Daibutsu, which was now left in an open grove. 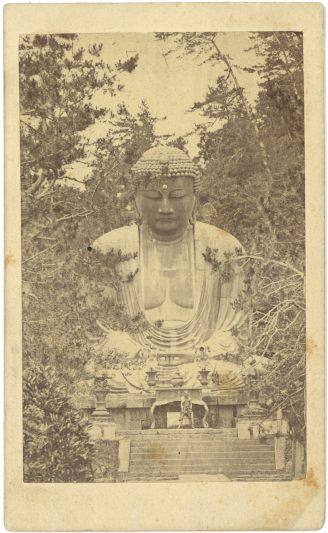 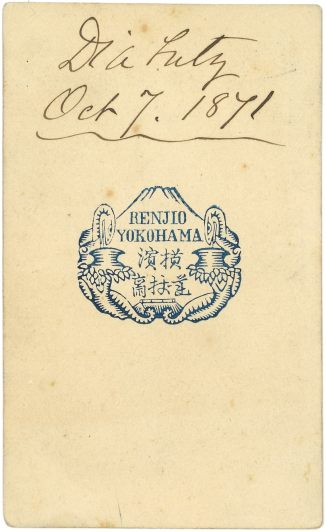 Interestingly, while the early written accounts of visiting the Daibutsu often included a vivid description of the “avenue of grand old evergreen trees,” the surviving photographic record rarely included this aesthetic aspect. Renjō was one of only a few commercial photographers who placed his camera rig far enough away from the bronze statue to incorporate the tree branches that converged on the walkway.[4] [Fig. 1] It remains uncertain if the rarity of this composition is due to a technical consideration of early photography (such as problematic lighting) or the resulting visual product which creates a cramped and partly obstructed view of the Daibutsu. If the latter case, the long row of trees and shrubs which undoubtedly added a sense of depth and scale to the in-person viewing experience is lost in the two dimensional space of the photograph. In the image above, a lone Japanese individual faces directly towards the camera, taking a wide, aggressive stance. This ultimately creates a sense of tension between the image and the viewer.[5]

The back of the cartes de visite is stamped by Renjō’s studio mark in indigo blue [Fig. 2]. The hand stamp depicts two serpentine figures twisting around a pair of trees and peering into two pots. The peak of Mt. Fuji and the top of a thatched roof also appear the background. This specific imagery appeared to Renjō in a dream when his business first started to turn profitable, thus he decided to honor his vision by incorporating it into his studio mark. The Japanese characters, written in a variant script (itaiji 異體字), simply say, “Yokomaha, Renjō Studio” (横浜 / 蓮杖斎).[6] The handwritten inscription at the top of the card notes the date as October 7, 1871, thus providing a firm terminus ante quem for the photograph. This possibly represents the date an unknown tourist visited the site. The popular name for the Daibutsu in the foreign port city of Yokohama in the 1870’s, “Daibutz,” is also imprinted at the top of the card, with an accidental inversion of the a and i (not all too uncommon a mistake).

During his professional photographic career, Renjō moved his studio to several locations, but never seems to have accumulated great wealth. In the mid-1870’s Renjō ended his commercial photography exploits and moved to the new capital of Tokyō (behind Sensō-ji 浅草寺) where he returned to his previous profession as a Western-style oil painter.

[1] Bennett 2006, esp. p. 71. A more detailed examination of Renjō’s life can be found in Tokyo Metropolitan Museum of Photography 2014. Some also credit Renjō with inventing the rickshaw (jinrikisha 人力車), but while this man-powered, two-wheel vehicle first appeared in Japan in the 1860’s, its attribution to Renjō is almost certainly misplaced. For many years, Renjō was considered the first Japanese professional photographer, but recent research suggests this mantle belongs to Ukai Gyokusen 鵜飼玉川 (1807–1887), who opened the first commercial photography studio in Edo in 1860 or 1861.

[4] A photograph held in the University of Massachusetts at Amherst, attributed to Felice Beato, contain perhaps the most foliage of any image I have seen [here]. Another image is here.

[5] Another similar image attributed to Renjō and dated to 1873 can be found at the Freer Gallery of Art and the Arthur M. Sackler Gallery (here). The position of the camera and framing is almost exact, but the figures by the altar are different. Older images by Renjō (still depicting the railing and balusters on the left) can be found at the Tokyo Photographic Art Museum (here & here) and among the Tom Burnett Collection (here). All three are also depicted in Tokyo Metropolitan Museum of Photography: 2014. The Austrian photographer Wilhelm Burger (1844-1920) travelled in Japan for a year spanning 1869 and 1870, and only some of his photographs of the Daibutsu include the railing to the left of the stairs leading to the second landing. Because of this, Renjō’s photograph here must post-date late 1869.

[6] The mark and its origins is described in Tokyo Metropolitan Museum of Photography 2014: 16-7.