When teaching introductory courses (like I am this summer) I tend to shy away from having students read texts/passages in class individually. I more typically type out passages on my slides and have students read collectively, or simply read the passage aloud and offer a question for discussion. Mostly this is due to time. I find reading in class often necessitates small group discussion, which then necessitates class discussion. Five minutes of reading (minimum), five minutes of group consultation (minimum), and ten minutes of class discussion can eat away precious class time. The topic needs to be worth the deep dive.

I have encountered more radical approaches to reading in class. During a teaching demonstration a few years back a grad student preparing for an upcoming interview did something quite…unique. The lecture was geared for an undergraduate class on the topic of the Portuguese Trans-Atlantic Empire. It was enthralling because the grad student giving the lecture was almost unhinged in his role playing, running back and forth and yelling as if he was really on a ship crossing the Atlantic during a storm. At some point he started throwing out balled up sheets paper and each person who caught one had to read it aloud to the class. (I really don’t remember the rationale, but I think it was something about sending out letters in bottles into the ocean.) Ultimately, this was not my style (and other than getting students involved and laughing, not too effective), but it was challenging to me to think about my pedagogy. 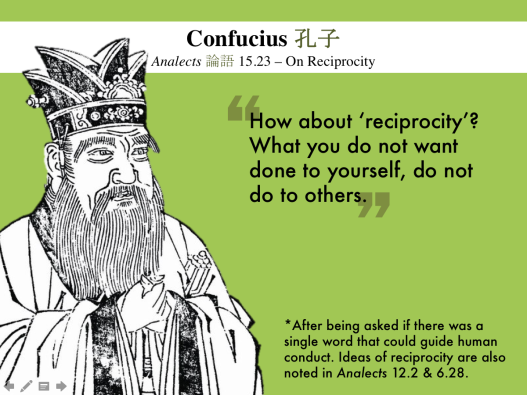 Nevertheless, I’ve been working on an in-class reading exercise to introduce the Confucian Analects. Its outlined here:

Set-up: After describing the political and social turmoil of the Warring States, I told the class that Confucius just wanted people to get along with one another. I asked them to find a passage in the Analects they would consider central to accomplishing this aim. After reading individually they consulted with their group and decided on the best answer along with one/two alternate(s).

Motivation: To add a sense of challenge, I told them there is a correct answer, or at least an answer I am looking for. This was not necessary, but I felt it fit the nature of my students/class. I also had a “scribe” write down the final responses for their group (they were not allowed to switch responses if they heard something better from another group) and post the responses to our course website for posterity.

Practice: I gave them 6 minutes to read, which meant they had to read with focus. They had 5 minutes to discuss and plead their cases to their group. Class discussion was between 15-20 minutes long. As each group offered their response I asked them why/how they made their choices and/or to explain what each passage meant in their own words and/or to give a concrete example from their everyday life.

Outcome: I thought this exercise went well. Each group, interestingly, chose different passages, there was no doubling of responses. This exercise allowed students to get a sense of the breadth of the Analects and to discuss the meaning of several passages with each other. I think having a clear focus or problem solving aspect added to the exercise. I have done a similar exercise in the past having students reading passages to find one they “liked” the best with mixed results. The class conversation ended up being more broad and ultimately covering terrain that was not central to my lecture (of course, this may be a desirable goal!). This new version of the exercise allowed me to move forward with my lecture and hit the themes I wanted to cover.

One group did select the “correct” answer (15.23), which allowed me to transition into my lecture on reciprocity and the “Golden Rule.” Other groups also talked about the gentlemen (junzi 君子), virtue (de 德), and humaneness (ren 仁) which allowed me to reference their insights later in the lecture.

Out of all the primary resources I have my students read, the Analects are probably the easiest to pick up and read passages at random and to stumble across something personally insightful. Thus even with minimal introduction to the material, an exercise like this is still fairly effective.